Subscriptions allow clients to listen to real-time messages from the server. The client connects to the server with a bi-directional communication channel using the WebSocket protocol and sends a subscription query that specifies which event it is interested in. When an event is triggered, the server executes the stored GraphQL query, and the result is sent back to the client using the same communication channel.

The client can unsubscribe by sending a message to the server. The server can also unsubscribe at any time due to errors or timeouts. A significant difference between queries or mutations and subscriptions is that subscriptions are stateful and require maintaining the GraphQL document, variables, and context over the lifetime of the subscription. 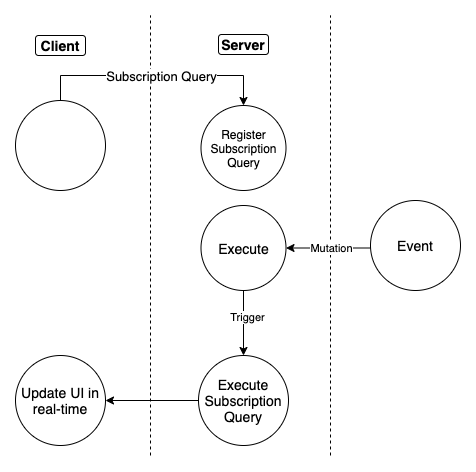 How to enable subscriptions in GraphQL

In GraphQL, it’s straightforward to enable subscriptions on any type. You can add the @withSubscription directive to the schema as part of the type definition, as in the following example:

For example, see the custom DQL query queryUserTweetCounts below:

Because the queryUserTweetCounts query has a @withSubscription directive, it will be added to the subscription type, allowing users to subscribe to this query.

Consider following Schema that has both the @withSubscription and @auth directives defined on type Todo. The authorization rule enforces that only to-do tasks owned by $USER (defined in the JWT) are visible.

Most GraphQL clients have a separate header section to pass Header-JWT key-value pairs. In the Apollo client, these are passed using connectionParams, as follows.

The following example shows the operation of subscriptions with authentication rules for the schema given above.

Eventually, the JWT expires and the subscription terminates, as shown below.

← How GraphQL works in Dgraph
Index of Directives →
Close