Getting started with Dgraph Cloud workshop on 5/20 - Free signup 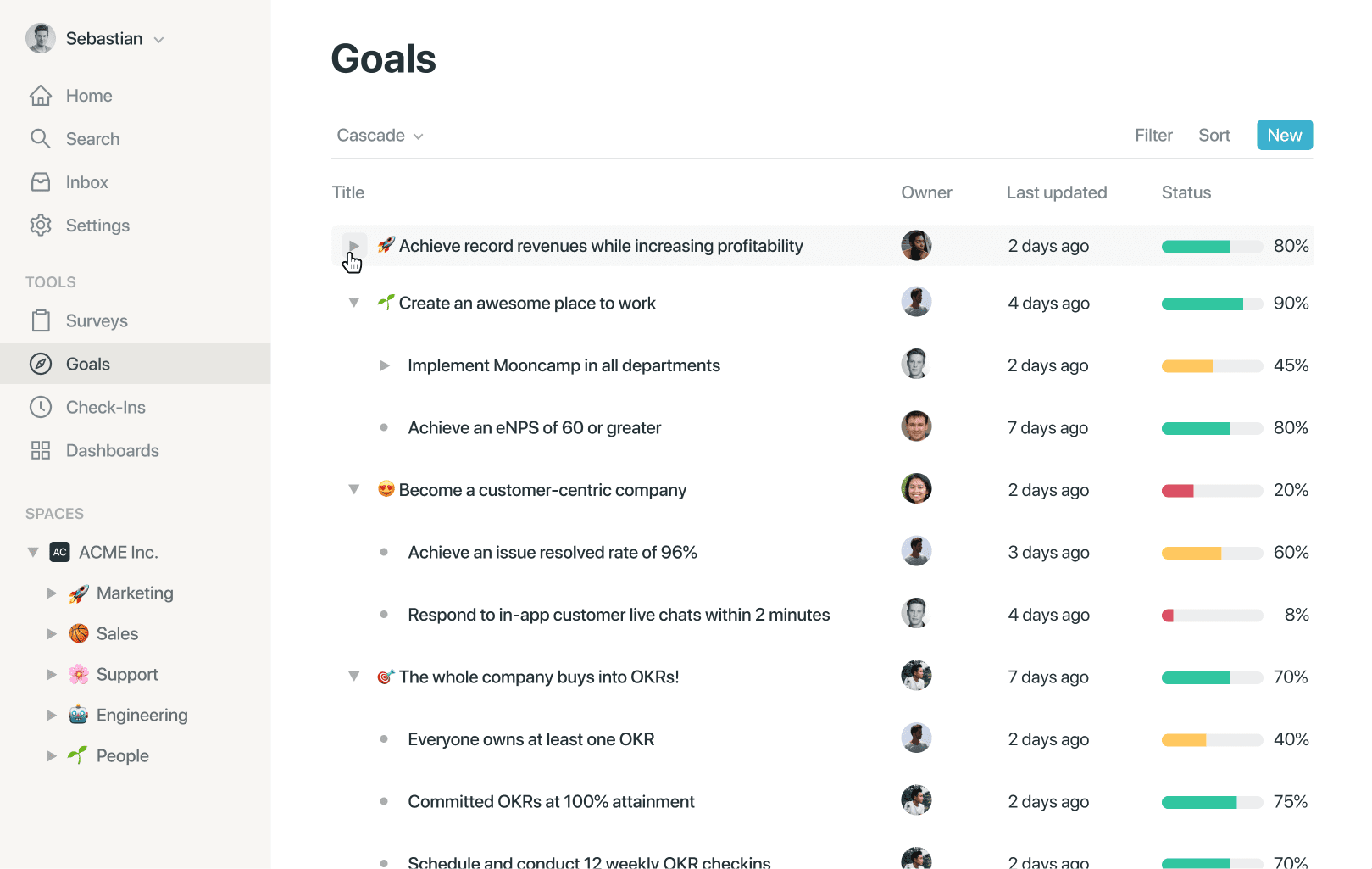 Dgraph is at the center of our value proposition. It was critical for Mooncamp to provide speed, scalability, and a high level of customization and innovation to successfully launch a startup and quickly gain a competitive advantage. Dgraph creates opportunities and possibilities we wouldn’t have otherwise. — Sebastian Walter, CEO, Mooncamp

Mooncamp, founded in 2018, is a software as a service (SaaS) operating system for organizational management that serves companies worldwide. The platform empowers its customers to create goals, define processes, and manage and measure workflows. Mooncamp also allows organizations to customize tools to develop and foster engaged, high-performing, and agile teams.

Mooncamp needed a new and native way to query data to develop an industry-leading solution.

Objectives and key results (OKRs) and 360° feedback are two popular business management strategies. Mooncamp found that existing organizational management software was ineffective at implementing these strategies. The inefficiencies created a perception that the strategies themselves were ineffective. Also, Mooncamp found that small to medium, and fast-growing organizations wanted software with additional functionality and capabilities to help them act on customer feedback and bring updates to the market quicker.

Mooncamp founders, Joschka and Sebastian, previously worked with tools like Confluence for OKRs and Google Forms for 360° feedback. However, neither of these were options for their platform as both Confluence and Google Forms relied on too many manual processes. Additionally, the tools imposed strict processes instead of being customizable and flexible for users' unique needs and requirements.

Mooncamp required greater automation and adaptability, and it needed a powerful, flexible database at the core of its solution for embedded workflows.

With Dgraph, we gained development speed that enabled us to increase implementation and addition of features. We’re able to win new customers due to our tools, functionality, and superiority of the product. These are key selling points, especially with our company being new in the market. The fact that we can keep up with the larger, established competitors worldwide speaks to the technological advantage Dgraph has given us. — Joschka Tillmanns, CTO, Mooncamp

On its journey to create a flexible, agile, and innovative organizational management, Mooncamp faced a number of challenges. Most of the challenges, however, revolved around one element - the database. After evaluating its options, Mooncamp found Dgraph to be the only database that could fuel Mooncamp’s software solution.

Following are some of the challenges Mooncamp was able to take head-on with Dgraph:

Scalability is at the core of Mooncamp’s and its customer’s growth strategy.

Dgraph offers Mooncamp a high level of confidence and assurance when developing new features and talking with customers as it scales to multiple machines or data centers easily. It also has sharded storage and query processing that minimizes the number of network calls. These capabilities power and enable Mooncamp’s growth.

With Dgraph, Mooncamp is confident that the backbone of its system supports limitless scaling.

Joschka talked about this peace of mind that we have during talks with consultancy companies. When we were asked if we can support thousands of users, we are able to be confident enough to tell them that we can. Because I know exactly how to do it. — Walter

Mooncamp founders wanted a database that they could make their own - so being open-source was a top priority. Dgraph’s popularity, with over 13.2K GitHub star and growing, captured Mooncamp’s attention.

Mooncamp enjoys that its development team can write workarounds to suit ongoing requirements as its customers' needs evolve. Also, as Dgraph’s user base grows, so do community solutions increase, that are available to all Dgraph customers.

The collaborative and supportive development environment is another reason why Mooncamp chose Dgraph as its solution.

Development speed was vital to Mooncamp as they wanted to maximize system impact and effectiveness and also have the ability to respond quickly to customers. To achieve this, Mooncamp needed the capability to introduce their own code, which a graph database and Dgraph’s support made possible.

We have a property system where you can define a hierarchy. You want to develop a use case where everyone in the company can see but only two people can edit it. You can easily solve this on an individual level, but hard on a scaled level. We are able to solve this on a scale because of Dgraph. This is a unique feature that none of our competitors has. Dgraph led us to a more innovative solution - have agility in your software.

Being an HR company, it was imperative for Mooncamp’s database to have certain features, including data security and compliance.

Dgraph checked both of these requirements as today it helps keep Mooncamp’s data secure and GDPR compliant. As Tillmanns explains,

As a SaaS solution, we needed a database that our customers could trust with the security and privacy of their highly sensitive data.

Dgraph handles everything a traditional relational database does, and in addition, it makes development easier and faster. We’re able to focus on new features, functionalities, and continually enhancing customer experience. Being open-source also allows us the freedom and assurance to go into the code and write workarounds specific to our needs. Customers are impressed with the speed, agility, and responsiveness we can deliver. Only with a graph database was this possible. It sets us apart.

Key Accomplishments: What Mooncamp Has Achieved with Dgraph

Initially, Mooncamp considered using a relational database for the core of its SaaS product.

We considered using a traditional relational database because of upsides — being well-recognized, established, and stable technologies and managed solutions. We had previously used MYSQL. — Tillmanns

Mooncamp tested MYSQL and determined that a relational database not only would require extensive, time-consuming customizations but also introduces n+1 problems and would result in a complex codebase that’s full of boilerplate code.

With Dgraph, Mooncamp was able to completely tackle the n+1 problem and the myriad of performance issues that result from it. They were able to avoid hindering high-level development and at the same time, increased functionality and flexibility to add and implement code without any additional effort.

High-development speed was key, and a REST API based on a relational database framework wouldn’t scale to meet our specifications. So, we built a prototype based on a GraphQL interface. We took MySQL and built a GraphQL layer with Go on top of it. You have to write quite a bit of code to do this and meet minimum requirements. The result was a decrease in development speed. Also, there was a loss of functionality since boilerplates and codes had to be introduced. We realized that we were implementing features that already existed in Dgraph’s GraphQL+-. Further, we were forfeiting benefits like end-to-end relations that help model relations between nodes. Also, an N+1 problem created a performance issue for using filters on our database, which was another red flag. — Tillmanns

Mooncamp customers have been surprised and delighted. In one instance, Mooncamp was able to help a customer with a Microsoft Teams integration, which was implemented in just three days (versus a quite lengthy roadmap offered by a competitor). Customers are amazed at the speed at which Mooncamp can innovate and deliver solutions.

Since Mooncamp develops solutions very closely with their clients, the ability to integrate customer feedback, requests, changes, and new features quickly and efficiently was extremely important.

Companies choose Mooncamp because they are confident in Mooncamp’s ability to deliver features without compromising on quality or performance and Dgraph has been a crucial part in building this confidence.

I had to implement a feature, where we expose a company’s name in case it has public data. In systems, I worked with before, this kind of logic was very hard to implement. With our system we built around Dgraph, it was a 6-line query and it just worked. It was amazing! That was my wow moment. — Walter’s personal experience with Dgraph

Also, with a traditional setup, REST API, and MVP framework, technical debts would have accumulated over time. With Dgraph, we have minimized technical debts. This significantly helps us to increase scale and performance and add rapidly new features.

The daily users of Dgraph at Mooncamp are its developers and for them, the transition from MySQL could not have been easier. engineers. The support, resources, and tools from Dgraph have made their experience extremely positive. From the interactive tour to learning how to work with query language GraphQL+-, functions, and features, Dgraph was easy to learn and deploy. They found it was faster to learn than SQL and more natural and intuitive, especially because Dgraph's query language is GraphQL+-, which is built around GraphQL.

GraphQL+- is so much more natural than SQL. You can learn GraphQL+- faster than you forget about SQL. — Walter

With Dgraph’s support and resources and having two endpoints for a query amputation, the code we had to write on the back end was significantly less than with SQL. We were able to develop and deploy our platform rapidly. — Walter

Additional resources, such as the Dgraph discussion board, Slack, GitHub, and support team, also provide Mooncamp with regular feedback, support, and solutions. Mooncamp views its relationship with Dgraph as a collaborative partnership, and these resources have a significant impact on the speed and quality of its product development.

Mooncamp raised an inquiry on GitHub related to replacing nodes. They received an immediate resolution timeline as well as workarounds for implementation. Mooncamp has been pleased that questions in the discussion forum are also answered in one day — empowering and equipping Mooncamp to provide the same responsiveness, collaboration, and partnership to its customers.

Dgraph also changed the way Mooncamp works. Prior to Dgraph, Mooncamp split 50/50 between their backend and frontend development. Now, with a strong and highly scalable backend, Mooncamp is able to devote 90% of its limited time and resources on the frontend - developing each feature around actual business logic and usability without being limited by the technical side of things. As a result, Mooncamp believes that, without Dgraph, its culture and operation would be different, and it wouldn’t create and innovate as it does now.

The agile approach frees Mooncamp from backend complexity, and focuses more on the customer experience within the framework of feature, flow, and business logic. This benefit is a necessity as a startup with limited resources. It also results in Mooncamp having time to focus on what matters most — growth and customers.

Dgraph gives us peace of mind. As a startup, we need a database at the core of our system and a partner we can count on from performance to speed and innovation to security. Dgraph also gives us confidence in our ability to scale and take on new customers and opportunities — to tell a partner that we can scale quickly, limitlessly, and globally. It’s a completely new level. Forget about SQL and discover Dgraph. — Sebastian Walter, CEO, Mooncamp
DOWNLOAD CASE STUDY pdf

Ready for your own Dgraph success story